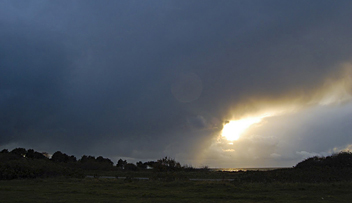 Sjælland is the largest island of Denmark. It's the island opposite of Sweden, where Copenhagen is located. It is connected by bridges to continental Europe.

Sjællandsleden is a long trail along the west and south coast of the island. The starting point is on the spike-shaped "annex" that is called Sjællands Odde, in the north west. Here, the boats arrive from Jutland. The end of the Sjællandsleden is on the opposite side of the island, in Rødvig. Between these two points the path follows the west and south coast, including a circular tour on the popular island of Møn.

Sjællandsleden does not include the east coast (Copenhagen) and north coast of Sjælland. But you can follow some connecting paths. The Fjordstien and the Nordkyststien along the north of Sjælland will bring you as far east as Helsingør from where you can see Sweden. And from Rødvig you can still continue a mile or 15 to the north along the Stevns Klint Path and the spectacular white limestone cliffs to the town Bøgeskov.

The only stretch of coastline that remains untouched by our breed of hikers, is the part between Helsingør - Copenhagen - Bøgeskov.

Recently a new branch has been added to the Sjællandsleden. This trail that runs straight across the island, from Korsør to Kastrup, near Copenhagen. This is the E6, which crosses from Kastrup over the new bridge to Sweden.

Documentation on the Internet for this path is quite limited. The homepage is somewhat difficult to operate.