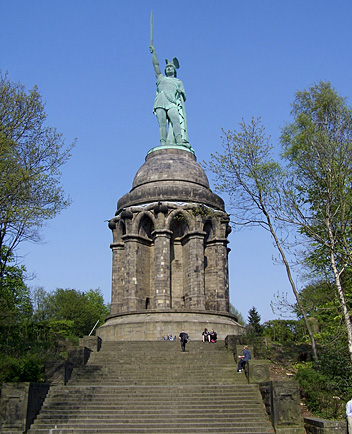 East of Osnabrück lies the Wiehengebirge, one of the northernmost hill ranges of Germany. The best known trail here is the Wittekindsweg, which follows the ridge of these hills. The Arminiusweg runs more or less parallel to it, but remains largely at the edge of the hills. The landscape is a varied: forests, fields, farms and small villages.

The trail is named after the Germanic warrior Arminius, who tried to keep the Romans at bay. His scheme worked pretty well in Teutoburgerwald. Arminius' story is the theme of the Arminiusweg. Along the trail 17 information signs explain the walker the history of the tribal resistance against the Romans, and they point us to the still visible remains of that time.