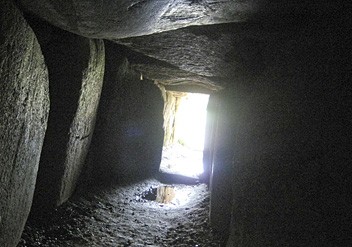 This path is named after the many dolmens (Hünengrab in German) in this region. These dolmens are prehistoric burial tombs, built of massive stones. They date from the Neolithic period, 3000 - 4000 BC, and can be found all over Europe.

The old name for this trail, by the way, is Friesenweg.

The trail connects to the Ostfriesland Wanderweg, which starts at the North Sea coast. The start (or end) of the Hünenweg is in the town of Papenburg. Papenburg is an old peat colony, a place that has sprung up around the exploitation of vast moors. This kind of villages are typically very long, and Papenburg is considered one of the longest in Germany. Hence, the path runs south, trodding on poor sandy soils. Eventually it leaves the flat north German landscapes and touches the first mountains of Germans interior. We now reach Osnabrück, and the historic center of this city is the end of the trail. On its way the trail visits some historical castles and monasteries.