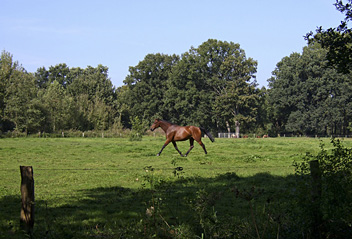 In the 17th and 18th centuries there was a very peculiar but also flourishing trade between Germany and the Netherlands, even extending into Belgium, France and Denmark. The traders and craftsmen earned their living by wandering around between designated areas with their merchandise on their back. In Germany these men were called "Tödden", and in the Netherlands "Teut", hence “Töddenweg”. It was a well organized and a closed trading system. These guys were a special brand of "Pedlar", which is a more general description of a tradesperson on foot.

We know that many Tödden worked between Osnabrück and the Netherlands. The Töddenweg formally ends at the border. But across the border, in the Netherlands, the way continues by a different name - Marskramerpad (Pedlar Way) - to Deventer. The Dutch and German parts together are called Handelsweg. Osnabrück and Deventer both have a historic center dating back to the Middle Ages, ages before the era of the Tödden.

The European Long Distance Trail E11 follows the same trail. In the Netherlands this is the Marskramerpad and in Germany the Töddenweg till Osnabrück.