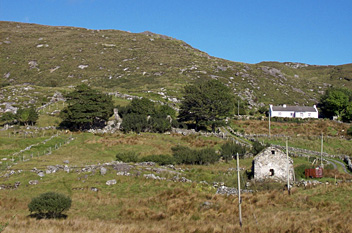 The Rosses Way runs through the area called The Rosses, in western Donegal. The area is flat and deserted, spotted with many small lakes. There is not much farming activity, nor forestry. You will be walking over small roads, called boreens in Ireland, and also over tracks over the open moorland. The Atlantic is not far, and often the trail touches the coast.

Slí na Rosann is one of the four circular trails that constitute the Slí Dún na nGall, or Donegal Way. Since this section is in a very quiet part of Donegal, accommodation is scarce. Plan ahead.