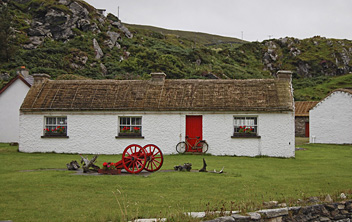 The Slí Cholmcille is a trail named after St Colmcille, who is said to have lived in this area in early Christian times. The trail is located in the southwest of Donegal, and is one of the four circular trails that make up the Donegal Way, Slí Dún na nGall.

It is probably the most remote and wild section of the Donegal Way, predominantly open mountain scenery, passing through some dramatic valleys, over extensive moorlands (wet), and touching on the coast in some places. The downside is the amount of walking on through-roads, which is quite unavoidable given the low population density and the difficulty of creating and maintaining paths over moorland.

Also, you should plan your overnight stays well in advance, since these are only available in the villages, of which are few.