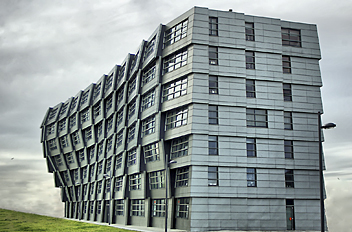 People living in Almere spend hours in their cars, moving at walking speed to and from the centres of economic activity. Almere has been build during the past thirty years in the new polder of Flevoland. It has been a place where people from crowded cities could find an affordable house with a garden. As further growth is planned, important decisions are to be made on infrastructure and economic development. The suburban area is to be transformed into a real city, intimately linked to Amsterdam.

If you are interested in how the Dutch make their own country, this is the place to visit. Almere is not only about building and architecture. Over the past decades, a new landscape has been developed. During the first stages of planning, the area surrounding Almere was thought to be used for agriculture. Since that time, the production of nature has become a bigger priority. Trees are maturing in the once open countryside. If you want to spot sea eagles in Holland, your best chance is in the Oostvaarderplassen near Almere.

The 82 km long trail winds through the suburbs and surroundings of the city. (DB)