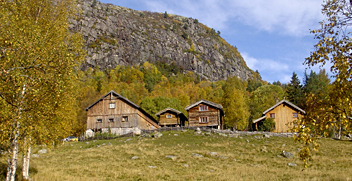 De Eastern Highlands, Austheiene, are situated in south Norway, west of Oslo. The region borders on the Setesdal, a river running south from the Hardangervidda.

Of course, Austheiene doesn't sound familiar to us. What is it like? It is a north-south running mountain ridge, with rolling peaks up to 1500 m. The trails mostly run between 500 and 800 meter in altitude, which is below the treeline (1000 m). Deep valleys cut across the plateau. There is one staffed DNT hut, three private huts and many self service huts. Traversing the plateau will cost you more than a week. This trail is especially fine early or late in the season, because winter is short.