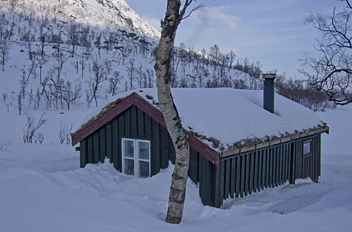 England has its Coast-to-Coast, America its Appalachian Trail, and Norway ... Norge på langs, or Norway Lengthwise.

Actually, this is not a marked trail. It is a dream only few of us can realise given the time and fitness required to cross Norway from its southernmost point - Lindesnes - to its northernmost point - North Cape.

There is no fixed route. Most people start in late spring in the south and work their way north hoping to reach the fjells of Finmarken in October when the snow has yet to come. Others start in the north in early summer and walk south hoping to be in time before winter sets in. Then there are those who start in january in the south and ski the whole lot up till the North Cape. Some people even kayak the route, from fjord to fjord.

It's a matter of principle of course, but you can try to stick to Norwegian ground. This is not the shortest way, however. Up north it's easier to cut short through Finland and some stretches through Sweden.

Pretty much of the 2.500 km can be walked from hut to hut. The Norwegian hut system is brilliant. In the northern part, especially above Narvik, this strategy is not going to make it. A tent is necessary. Marked trails will bring you to Alta, the odd day not counted, but then from Alta to the North Cape, much of your walk is over fjell using your GPS and/or compas. Inevitably, the tarmac might be a pleasing alternative once in a while.

On the internet, a list of hikers who accomplished or tried the NPL can be found. Many enthusiast and well documented trail reports can be found on the internet. They are almost always in Norwegian. So, time to get to learn Google's translation service.