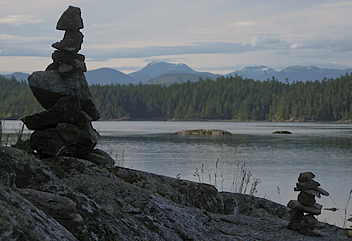 A wilderness walk in magnificent part of Canada, on the west coast, overlooking the wide Strait of Georgia towards the snow covered mountains of Vancouver Island. The trail is located on the Upper Sunshine Coast in Powell River, British Columbia. The trail stretches 180 km from the Saltery Bay ferry terminal in the south to Sarah Point in the Desolation Sound Marine Park in the north.

Since the trail goes up and down, start in good condition. Most hikers walk some 10 to 15 km per day. Along the trail are campsites. Best period is August – September, but even then, rain is likely. Bring a water filter. You might spot black bear.