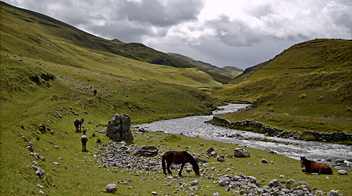 Qhapaq Ñan is the name used for the extensive system of ancient roads and trails connecting all parts of the Inca Empire. The popular Inca Trail in Peru is in fact only a small section of this system, which in total spreads out over more than 6000 km. Qhapaq Ñan consists of two main routes running parallel in a north-south direction: an eastern route through the mountains, a western route along the coast and foothills of the Andean Range. Numerous side-routes connect the two, and others lead from the main routes to outlying districts.