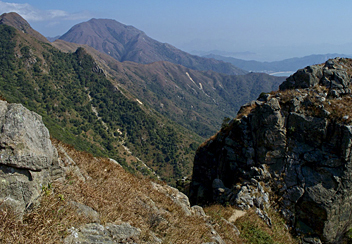 70 km, Lantau Island, starting and finishing in Mui Wo (circular)

Island walks are always great. Nowadays, Lantau is connected to the mainland by bridge, the new Hong Kong airport is located on its West shore, and crowds flock around the giant Buddha and into Disneyland Hong Kong. These modern distractions only serve to underscore the quality of this circular hike on Hong Kong's major island. Lantau was and remains a green, sparsely populated island.

The Lantau Trail (鳳凰徑) starts in the village of Mui Wo on Silver Mine Bay, and runs westwards into the central uplands. Some pretty high peaks are crossed, including the highest of them, Lantau Peak (934 m), offering wide views over the green hills around you and sandy bays below. On Lantau's west coast, the trail passes some monasteries (offering food and lodging) and coastal villages. The giant Buddha is also part of the show. Now the trail runs back to its starting point, tracking the southern coastline of the island where you will enjoy beaches and maybe a refreshing (?) dive into the salty waters.

There is nature and culture along this trail, a pleasant mix of incentives, both old and modern, West and East. One of the better island walks in the world.