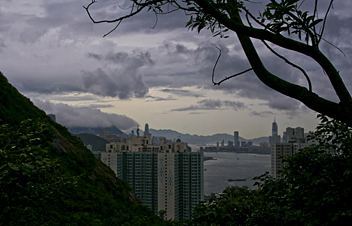 This 78 km long trail explores both Hong Kong Island, the original English concession, and the New Territories that where on a 100-year lease from China. This makes for a varied walk.

The Wilson Trail (衛奕信徑) starts on the south shore of Hong Kong Island. The first stage goes uphill to some 400 meter, and then drops down on the other side of the island into the world city. The trail crosses to mainland Hong Kong via the Metro system. East of Kowloon, it heads for the mountain range that is also covered by the MacLehose trail, but the trails choose different itineraries. From Lead Mine Pass, Wilson Trail heads north, crosses the railway connecting Hong Kong with China's capitalist free port Shenzhen, and ending at the Starling Inlet, near the Chinese border.

The Wilson Trail is the newest long distance trail, established in 1996. Main asset is the exploration of no less than eight Country Parks, with their forests,open hill slopes, and views on the omnipresent Southern Chinese Sea. The trail is pretty strenuous too, because of it's going up and down many hills.