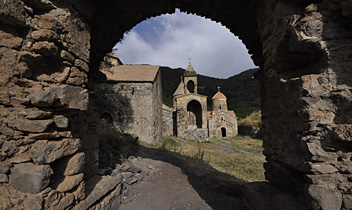 Nagorno-Karabakh is a region in the Lesser Caucasus mountains. Although it is internationally regarded as part of Azerbaijian, it has declared itself independent and is now claimed by both Azerbaijan and Armenia.

Despite all the turmoil, Nagorno-Karabakh is home to the Janapar Trail, the one and only truly waymarked long distance hiking trail in the whole Caucasus region! The trail crosses the full length of Nagorno-Karabakh from northwest to southeast, and will take 14 days to complete.

The landscape is largely mountainous, the higher slopes covered in forest, with monasteries, fortresses and villages in the foothills and valleys.