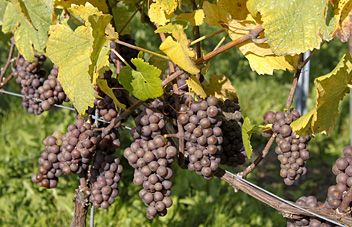 The Schwarzwaldverein has plotted three paths through the famous wine regions west of the Black Forest. The Bresgauer Weinweg is the second and middle path and roughly runs between Offenburg and Freiburg.

You are walking close to the mountain edge of the Black Forest, and will enjoy beautiful views over the plain of the Rhine, with beyond the Vosges in France. The occasionally climb uphill could easily be combined – given a basic condition - with a daily glass of Bresgauer wine.

The wine from this area is called Breisgau. The prosperity that has been brought by growing grapes, can be seen in the historic towns, timbered houses and beautiful town houses. There are dozens of independent wineries – called Weingut - who will sell their white wine at the door.