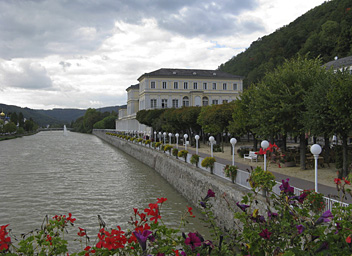 The Ems is a small river which springs from the Teutoburger Wald, a low mountain area to the west of Osnabrück. It flows north towards the North Sea, and ends in the Dollard, a deep sea inlet, border between The Netherlands and Germany. Our trail starts in the town of Rheine, where the Ems can be navigated. The trail faithfully follows the river. For long distances you will walk on the dikes alongside the river. A river walk is always something special. Dikes constitute high points in the surrounding landscape and the hiker feels like a king above the mobs. The mobs in this case are literally very close, because many people have fun in drifting up and down the river, in boats of all cut, from bathtubs to luxury yachts. The Germans seem to compensate their lack of coastline by wearing a fairly pronounced sailor gear once they get on a boat. So enjoy it.

Another feature of this landscape are called "Geest". These are sand and gravel ridges slighty rising out of the surrounding moors. The height differences somethimes are hardly noticeable, but the old farmers knew very well where to put the crops and where the cattle. At present , most moors have been reclaimed. But the typical layout of the “Geest” is often recognizable in the landscape.

A small part of the trail, the northern tip, is used for the European Long Distance Trail E9.