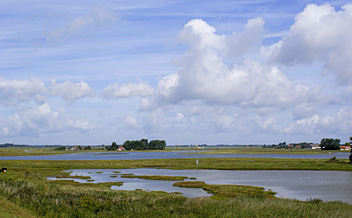 In february 1953, a combination of a western storm and spring tide battered the coasts of the North Sea. In England, Belgium and Scotland, land was flooded and people died. The Netherlands was hit the hardest. The dykes in the southwest - Zeeland - broke on many places and an entire province was flooded, leaving 1,800 people dead, livestock killed, farmland and villages destroyed.

The Dutch hiking organisation KNBLO opened a trail of 154 kilometer on the island of Schouwen-Duiveland in memory of this terrible disaster, 60 years after. The path strings together memories and remains of the floods. It is marked and described in a little guidebook.