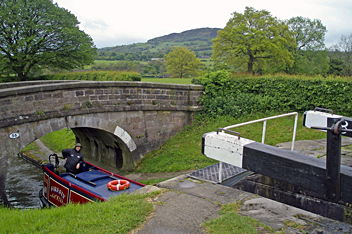 From the late 18th century to the mid 19th century the English built many canals. Horses towed the small and heavily laden boats along. It must have been a special experience to glide through the canals behind a trudging horse, from the overcrowded industrial centres – Manchester is part of the trail – into the peace and quiet of the countryside.

Today, many canals have been saved from destruction by enthusiastic people, and towpaths were transformed into walking and cycling paths. The 97 miles, 156 km long Cheshire Ring Canal Walk follows four of these canals. Walkers can fully enjoy history in the cities and the countryside, while overlooking the hilltops of the Peak Disctrict.