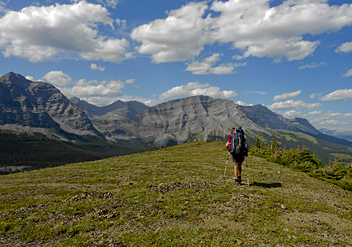 The trail crosses many national and provincial parks. However, it is not officially recognised by the authorities. Therefore, most of the trail is unsigned. Only the 100 km stretch in Alberta Crown Forest Reserve are maintained by the Friends of the Great Divide Trail.

The trail passes through five national parks, seven provincial parks and four wilderness areas. The character of the trail changes from tourist trail to backcountry trail and crosscountry route. The backcountry bushwalking is very much a contrast to hiking in the national parks. Therefore, thruhiking is the exception, and the great sounding name and great promise of this trail do not reflect any popularity of it.