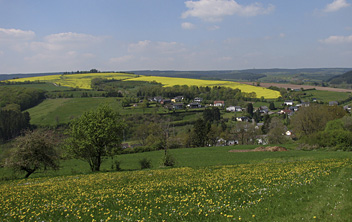 This main trail (HWW) of the Eifelverein is named after the north-south pilgrimages to the grave of the Apostle St. Matthias in Trier. The trail is the westernmost of the Eifelvereins north-south routes, linking the landscapes of the German-Belgian border with the German-Luxembourg Nature Park. Beginning in Aachen, you will be walking through the Eifel National Park, including many of its attractive sights, and the Moselle valley.

Nowadays, the popularity of the “Steigs” replaces the old trails. Between Aachen and Trier runs the Eifelsteig. The Eifelsteig takes a more easterly course through the Eifel than the Matthiasweg. Obviously, this new trail attracts more hikers than the old ones. This is due to modern documentation, new trail management methods, more publicity etc. However, the old trails, like the Matthiasweg, are still there, are well marked, are indicated on the maps and described in guidebooks. So, nobody prevents you from taking the o(l)dd trail!