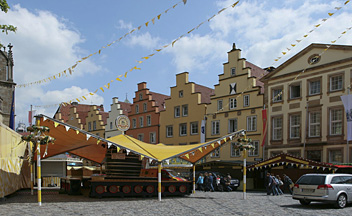 During the later Middle Ages there was a flourishing trade between the Hanseatic cities of northern Europe. A substantial share of this trade went overland, on primitive roads. It must have been a huge hassle for these big ox-drawn carts to get through the worn out and often muddy tracks.

The trade between Hamburg, Bremen and Osnabrück had to go over land. The Pickerweg follows this ancient trade route. The starting point is the city of Osnabrück. The end point is the village Wildeshausen and hence one can continue to the city of Bremen via the Geestweg, or to Wilhelmshaven by the Jadeweg.

It goes without saying that the traders sought to find firm grounds for their feet, cattle and merchandise. The Pickerweg therefore follows sandy soils and the edges of the hills.